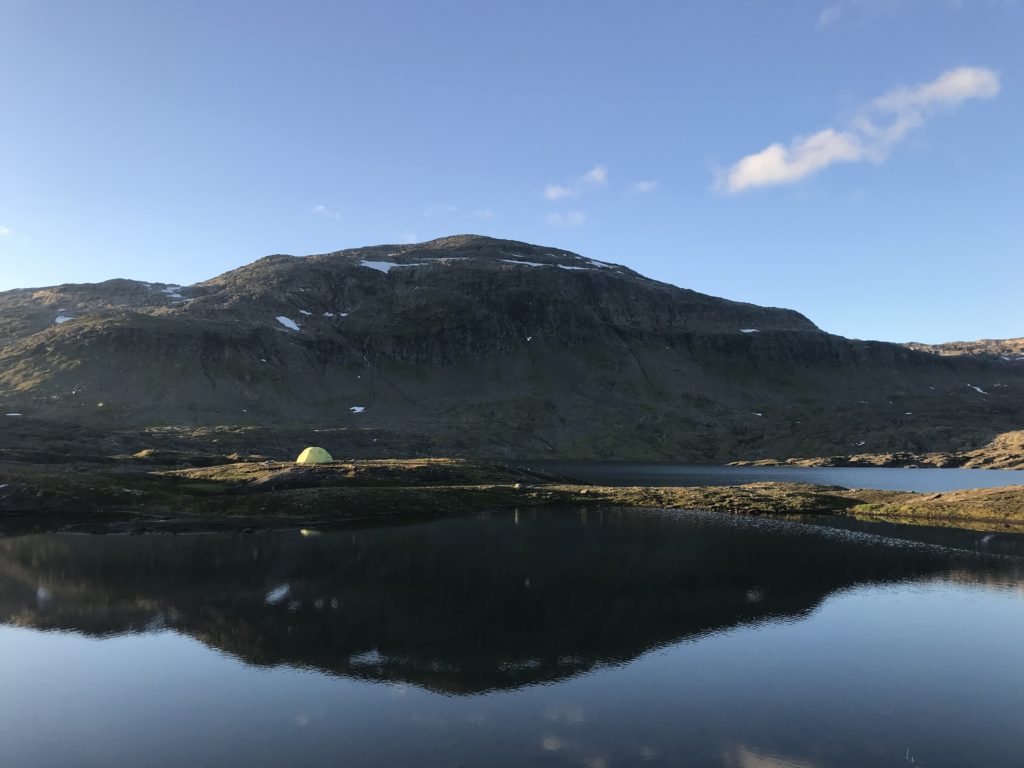 Camp at Røysvatnhyttene
Well, my restful night inside the cabin turned out to be everything else but as expected.
I woke up at 00:15 by the loud noises of people arriving, turned out that a group of 8-10 people just came in and intended to start cooking. After asking them twice to keep the noise down (according to NOT rules it shall be quiet after 11 pm), I just grabbed all my stuff and moved over to the smaller cabin. Hoping that these people would at least have the sense not to disturb there as well…
Luckily enough they didn’t and after some initial difficulty going back to sleep, I finally slept until 7 am.
Having had a rather large dinner the night before, finishing off the first batch of pecans as desert, I went for coffee only in the morning. Before 9 am I had everything packed and went to check on my fellow guest from the other cabin, yet she already departed. The group was also gone and I noticed that none of them had registered their stay in the cabin, thereby also clearly indicating that they didn’t intend to pay the fee. On top of that, they also left the cabin without either cleaning or locking it. This is, of course, completely unacceptable as the whole operation with the cabins here in Norway builds on trust and people paying the fees voluntarily.
Looking out I could still see the group on their way to Sitashyttene, yet they were too far for me to catch up easily enough and so I just started my hike towards Røysvatnhyttene. There is a system of rowing boats to get past a narrow part of the lake and while on the water I’m overflown by a helicopter. They landed not far ahead of me and I soon saw the chopper on its way back again. Reaching the first bridge I was presented with the explanation, three guys doing repair work on a bridge that definitely needed it.
Turns out they work with the NOT and one of the guys is the father of the boss.
Besides, these guys are 84,82 and 75 years of age, and still doing rather hard physical labour out here – respect!!!
I mentioned the issues with the group and that they’re heading towards Sitas and the three men were very interested in taking care of the matter. I hope they managed to land a helicopter on the group and set the matter right! Anyhow, I could now drop the whole thing.
Also, I got the number of the bosses father and he asked me to report anything that needs attention along the trails in Norway! The whole rest of the day was just a pleasure, the weather was really nice, partly sunny summer day with a breeze that was far from chilly. The trail was pleasant to walk yet in some stretches really faint and poorly marked, at the same time there’s a bunch of reindeer tracks.
I highly recommend being really observant for the markers and, if You chose to hike this part, to make sure You’re ridiculously comfortable following map and compass. Chances are that You’ll lose the trail more than once, it always shows up again, though! I took a short break at the bridge south of Skuogejavrre to charge my phone (sun came out brightly right there) and pick some mushrooms before continuing the last part to the cabin.
Arriving here I found the place deserted and, looking around, there was a sauna in a separate building!!!
Sooo good to be able to clean up again for real, the water in the lake was cold yet not freezing and sitting in the sauna first even allowed for a short (very short…) swim.
Finally, after cleaning up myself and washing some clothes, I had dinner after around 22h fasted. Adding in the mushrooms made it even more delicious and enjoyable, I’m just stoked how energetic and content I feel hiking that far in this region without having to eat all the time. I love being in ketosis and enjoy the freedom to choose when to take in food! Having found a really nice campsite just a little bit away from the cabin, I look forward to an undisturbed nights sleep!