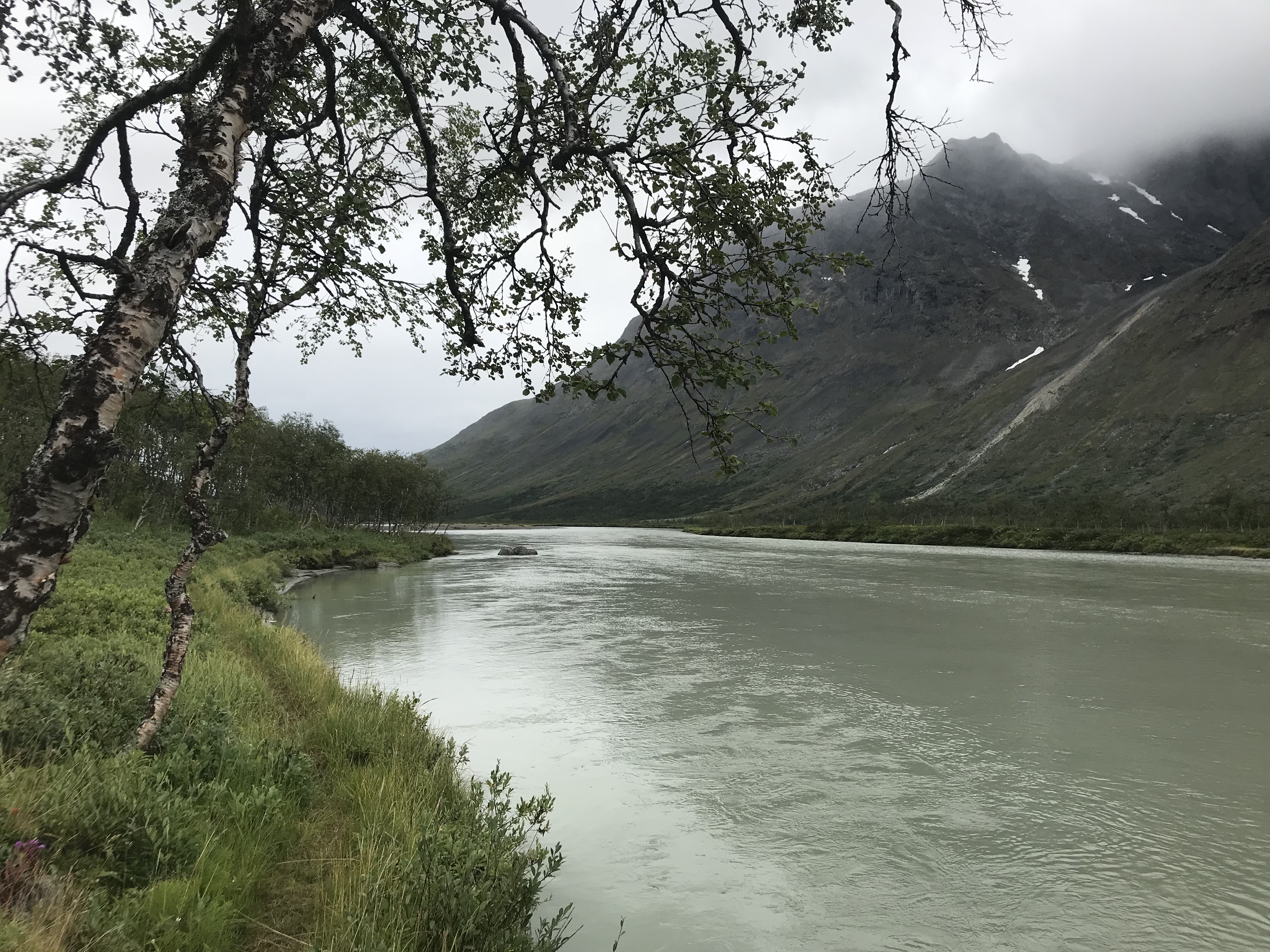 Read more
Camp at Rapa Ätno
I woke up rather early around 6 am after just 9 hours in my sleeping bag, no real rain during the night and I slept fairly undisturbed. Stayed still for some time to not disturb people nearby and a good half hour later I started my day with reading and a cup of coffee!
Turns out most of my neighbors were also early risers and as soon I was finished with my morning routine, I had a couple of good conversations.
Finally, I started the hike at 9 am heading southeastward towards Snawavagge and then Rapavalley. The trail was, once again, easy to walk and follow. There were a few stretches of wetlands where one has to find one’s own track, yet the trail is always there again on the other side. Just make sure You’re on the beaten track before continuing too far, there are quite a few reindeer tracks that might be a little confusing. The first river crossing was covered by a huge step between two large rocks between a small waterfall. Looking a lot sketchier than it really was.
Coming up on the second crossing, just before the fork in the trail, there was no real alternative to changing shoes and getting my feet wet.
Shortly after I felt a slight discomfort at the back of my left heel, stopped to check it, and it showed that all the river crossings finally had gotten the better of my bandaged blister. Compeed and everything were soaked and coming off…
Great reminder to keep taking small signs seriously, especially when it’s about the feet. It just took a few minutes to get everything dried out and rebandaged, and I was ready to continue without risk of worsening the issue. This was one thing that, if ignored, could have jeopardized the entire future plan for the tour. Now, after that second river crossing, You’ll find a bunch of different trail separating from each other. The right one is really well used and quite easy to distinguish from the reindeer tracks and soon You’ll also find the first stone marker. They are few and far apart, yet as long as You walk on a real clear trail and see boot prints regularly, You should be good.
The trail slowly turns southward after one more river crossing and after some time it gets rather steep on the west side of Bielatjåhkkå. I’d like to recommend against doing that stretch during heavy rain, rather wait for decent weather! After that slightly sketchy part the trail ascends quite steeply up to Snawavagge where it passes by a few lakes and some really awesome campsites.
I had been recommended to camp right after exiting the valley at its eastern mouth, yet two considerations made me continue. One was plainly the time of day, it was just way too early to stop, and the other one was the rather heavy wind that made me prefer descending into the valley. A decision that was proven right by the gushes passing through the air later in the afternoon and evening. Finding a really nice place close to the river, that also corresponded well with the description of the last descent site for the rest of the valley hike, I stopped around 3 pm and got settled. While still receiving some rain showers, I could dry some equipment outside and pitch a decently dry tent.
The weather looks a little friendlier now towards evening and I look forward to a calm night!